OK, cat crazy people (like me), I ran across this YouTube and had to share it with you.  Cats, cats and more cats!  This lady has it right! 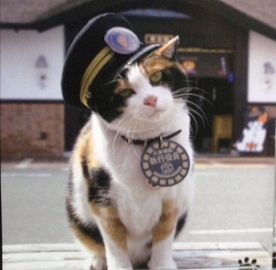 Tama, stationmaster of Kishi station will live forever in the hearts of the Japanese train patrons.

Tama, a tortoiseshell by Japanese standards, and calico by American, rose through the  ranks to become one of the world’s most endearing celebrity cats.

Known as Tama-chan (“Little Treasure”), she started her life as an outdoor stray, fed by a local grocer near the Kishi train station.  She frequented the station, endearing herself to passersby.  One fine day in 2006, she was appointed stationmaster by an official at the Wakayama Electric Railway.   She was given her own station cap in her own size; a stationmaster’s badge, and her own office with bed and litter tray.  Tama’s presence there attracted increased ridership and revenue to WEC.  In recognition of that, she was honored with her own train in 2009, designed with her image on the outside and interior of the train.

Tama was promoted from stationmaster, to super-stationmaster and honorary division chief.  From there, she became an operating officer and a company vice-president.  Not bad for such humble beginnings!

In June of this year, Tama passed on, honored by a funeral attended by thousands.  She was honored as a goddess  and buried in a shrine.  Her successor Nitama, “Tama the second” has now assumed her duties at the Kishi station.  I’m sure Nitama is discovering that “Tama-chan” is one very tough act to follow!

Are all calico and tortoiseshell cats female? Are 80% of orange cats male? Neither one! But the myths have a basis in fact and you’ve got to learn some complicated genetics to understand why it seems that way. Some coat colors are linked to X and Y chromosomes and some are just out there. Some actually cause a coat to be a certain color while others just influence the possibilities. Let’s take X and Y and male and female and black fur and orange fur and white fur, toss all the possibilities in the air and see what falls out. Cats basically have three coat colors, black, white and orange, or red as it’s known to breeders. They also have patterns, and some breeds have specific dilutions or combinations of these colors that may seem like brown or blue or even purple, but they are actually variations on these shades. We’re just talking about the distribution of the big three colors. Leaving white out of the mix for another day, coat colors orange and black are carried on the X chromosome. Because males are XY, only getting one X from their mom, they tend to be whatever color that X carries, orange or black, nice and simple. But females are XX and actually inherit, not only two options for coat color, but two actual coat colors. If both X chromosomes are black OR orange, she is either black or orange, but if one is black AND one is orange, she is BOTH, forming patches because each skin cell has a tendency for one color or the other! So to answer, first, the “80% of orange cats are male” theory, male cats have one chance at color because of their one X chromosome, while females get TWO chromosomes and BOTH have to be orange for her to be orange because if only one is orange she is calico, so it simply reduces the chances of her being orange. Now for the theory that “all calico or tortoiseshell cats are female”, it’s close to true but it’s not a hard and fast rule. For a cat to have two coat colors it needs to have two X chromosomes; males normally only have one, but they can, like humans, have the Klinefelter’s XXY and therefore have two coat colors, though they are sterile and may have related health problems. They can also have a “chimeric” coloration wherein two embryos of different coat color develop pressed together and impress their colors on each other, and orange cats will sometimes develop a black spot as humans develop birthmarks, thereby having three coat colors. These last two tri-color males are as fertile as any other, so don’t assume they don’t need to be neutered! None of these is common but can be found, and contrary to popular opinion, they are no more valuable than any other mixed-breed cat, but just as loving and worthy of a good home.