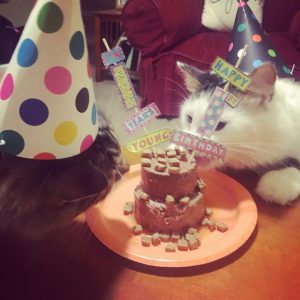 I have loved cats since infancy.  Or so my Mom used to say.  My first cat was a jet black, sleek looking cat named Ebony.  There’s a faded picture of my Mom lowering Ebony into the cradle to take a better look at me.  I don’t know if Ebony was that impressed, but I’m sure that I was!

Since then, after years of living with Ebonys, Taffys, Lilys, Bogeys and Chesters, with countless moments of joy and of sadness (at their eventual loss), I am still crazy about cats.  I was crazy about cats long before the internet’s love affair with them.  In fact, I even opened a cat shop in 1998 and appointed a newly adopted tuxedo boy named Bogey as our official shop cat. (now, you can shop at my website, MyThreeCats.com)

My heart has expanded with each cat experience.  So much so, that I couldn’t help sharing the passion.  Today, I serve on the Board at FosterCat, Inc., a Pittsburgh based network of foster homes and volunteers who rescue and save cats’ lives every day.

Cats are so tuned into us that they know when we are energetic, happy, stressed, sick, exhausted or grieving.  How many of you have experienced the comforting feeling of a cat tending to you while you lay in bed, sick or hurting?  It’s pretty special, whether they decide to catnap beside you, or tap your face with their little paw to say, OK, I’m here.  (Of course, LOL, they also use techniques to wake you up.)

The daily care giving time I have invested in my cats has been rewarded many times over with their unconditional companionship and affection.  Only those who have owned cats (or should I say, have experienced being owned by them) will understand this.

Anatole France made this observation:  “Until one has loved an animal a part of one’s soul remained unawakened.”  I wholeheartedly agree.

OK, cat crazy people (like me), I ran across this YouTube and had to share it with you.  Cats, cats and more cats!  This lady has it right!

We thought you might be interested in seeing how your city stacks up to the top 100 pet friendly cities.  WalletHub (August 8, 2017) provides this useful data.

Years ago, pet owners had access to only a handful of businesses offering animal services and supplies.  But new pet businesses are cropping up every day to fill the demand of this growing breed of consumers. Today, we spoil our pets with all kinds of luxuries, such as gourmet pet cuisine, upscale hotel accommodations and even pet “dating” services.

With pet parents in mind, the 100 largest U.S. cities were analyzed across 21 key metrics. The data set ranges from minimum pet-care provider rate per visit to pet businesses per capita to walkability. To Our Cat Loving Readers,
MyThreeCats.com goes beyond being an on line specialty cat boutique.  Over the years, since the beginning of our business in 1998, we’ve helped advance the initiatives of numerous cat shelters and cat rescue organizations, as our resources permit.
You can help us continue the effort.  We invite you to post your favorite cat rescue story (perhaps your own personal cat rescue story?) on our Facebook site, now through Friday, August 11th.  Then shop now through August 11th at MyThreeCats.com and we’ll donate 5% of sales proceeds to Alley Cat Allies.  Alley Cat Allies is a non-profit organization advocating the humane treatment of all cats.

A sincere thank you from us and of course, the cats.

Happy Shopping!!!
P.S.  The best compliment we could receive is a referral.  Kindly pass this offer to your